EH&S Fire Safety manages over 12,000 extinguishers on the University of Wisconsin campus.  Services include:

If you have questions regarding your fire extinguishers, please contact Fire Safety

This is a high pressure vessel filled with either 5 or 10 pounds of liquid CO2. It is only to be used on flammable liquid or electrical fires. Because the CO2 is expelled as a gas the extinguisher has a very limited operation range of about 4 to 6 feet. This extinguisher is found mostly in labs or mechanical rooms. The carbon dioxide extinguisher can be easily identified because it does not have a pressure gauge.

A halon fire extinguisher uses bromochlorodifluoromethane, halon 1211, as its extinguishing agent. Halon is an extremely clean agent that leaves no residue, making it a good agent for use around computers and other sensitive equipment. It has a range of about 15 feet. Pull the pin, aim at the base of the fire, and sweep from side to side. Operation is similar to the ABC extinguisher.

These extinguishers are for metal fires. Extinguishment is achieved by isolating and smothering the fire with either a copper or sodium chloride based powder. The dry powder extinguishers are mounted on two wheel carts. Operation is similar to ABC, Halon, and Carbon Dioxide extinguishers. Pull pin, take the hose and wand assembly out of the retainer, and aim at base of the fire. It has a range of 3 to 6 feet.

In recent trends, commercial kitchens have started using more efficient cooking appliances and unsaturated cooking oils that operate at higher temperatures than previous appliances and oils. The Class K extinguisher was developed to combat this new hazard. Class K extinguishers can be found in kitchens on campus or the University Hospital where deep fat fryers are used. This extinguisher uses a wet potassium acetate based, a low pH agent that has a greater firefighting and cooling effect for this type of hazard. Their range is 10-12 feet and will last for about 40 seconds. Once again break the seal, pull the pin, and aim at the base of the fire.

Before you fight a fire, make sure: 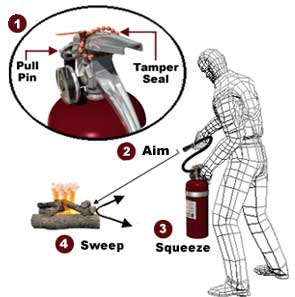 Pull the pin that unlocks the operating lever.

Aim low. Point the extinguisher nozzle or hose at the base of the fire.

Squeeze the lever above the handle to discharge the extinguishing agent. Release the lever to stop discharge.

Sweep the nozzle or hose from side to side. If the fire is going out, move toward the flames; keep the extinguisher aimed at the base of the fire and sweep back and forth.

The Five Classes of Fire

Fires that involve ordinary combustible materials such as wood, cloth, paper, rubber, and many plastics.